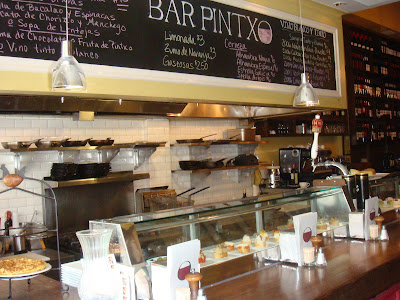 Los Angeles finally has an authentic tapas bar. It looks and feels Spanish. The biggest surprise is an American owns it, Joseph Miller, of Joe's Restaurant in Venice.

Readers of this blog know I could live on Spanish tapas. I was in heaven sitting at the bar, drinking beer with my cousin and grazing on many little plates of food.

We started with the Jamon Iberico, the Spanish ham similar to Prosciutto, but better. The acorn fed black footed pig is a national treasure in Espana, served hand cut in paper-thin slices. In the US, the slices are served thicker, still good but not optimal. You need experience to cut the ham just so. The man behind the counter had never even been to Spain. He did a decent job, regardless.

Spaniards serve their shrimp whole, in the shell with the head still on it. The flavor gets locked in that way. Living in Spain I became skilled in peeling cooked shrimp with my fork and knife. I eventually got over the shock of seeing people suck the juices out of the head. It sounds barbaric until you taste it, that is the best part.

Gambas al Ajillo another typical Spanish dish, is comprised of smaller shrimp bathed in a garlic oil with a hint of red pepper, typically served in a low, terracotta dish. At Bar Pinxto, the shrimp were served on a skewer with a little garlic oil on the plate, a delicious interpretation. I was happy to see the heads remained on the grilled shrimp. The shells were removed, understandably. The oil had a nice kick to it. We would have preferred a little more of it to dip the bread in, part of the fun.

The Croquetas de Pollo y Jamon (creamy chicken and ham croquettes) were ambrosial, soft and light inside with a crisp coating. I could never tire of eating these treats. Yum. This could be addicting.

The special of the day was a Paella with spinach and cod, a combination I was unfamiliar with. We ordered it because it came with Patatas Bravas and a dessert, a better buy. It lacked a unifying flavor, as if each component of the dish was prepared separately.

The Crema de Chocolat, a thick, dark chocolate cream was rich and delicious. A lovely ending to an enjoyable meal.

My only question: what took me so long to try it? I already have plans to return next week.

Hey, recently found your site. Haven't been to Pinxto yet but it's on my list. Especially after visiting Spain this year.

Great writing! I'll add you to my bookmarks.

Not much of a blogger, but I have enjoyed several of your recommendations, this being the most recent, so keep 'em coming!

I would go to the ends of the earth for bacon wrapped cheese & dates. Have you tried the bacon wrapped fig & goat cheese at The Tower Bar on Sunset? Check it out. Patty

Great recommendation Patty. I'll check it out. Thanks!