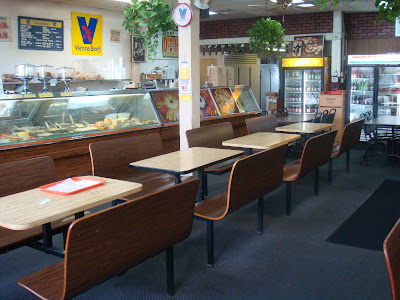 The secret to their spectacular deli sandwiches is the rye, they double bake it, creating a crispy crust with a soft interior: just heavenly. Label's Table is all about the sandwiches.

You might do a double take as my friend Steve did when you see this place. It looks like an old cafeteria. Last week I was sitting at a booth waiting for Steve. I saw him outside with the phone to his ear. Next thing I know, my phone rings. It's Steve. From the sidewalk, he wasn't sure if he had the right place. But by the end of our meal he agreed that Label's Table is a little gem of a deli.

The decor is no frills as if it has been around forever, almost since 1974. The deli counter is on one side, refrigerated glass cases with Dr. Brown's soda on another. Uncomfortable plastic booths without seat cushions take up the rest of the place.

It is an odd place; a sign on the wall reads "Food purchased on the counter cannot be eaten on the premises", yet ordering takes place at the counter. There are no servers. When your order is ready they call your number and you pick it up yourself. Pretty basic menu here. Sandwiches are $7.50 for a whole, $4.95 for a half. The half is enough for me, even though I could eat a whole.

My grandmother introduced me to this place many years ago when I was a child and since then we've had many great lunches. Every time we have the same thing: a pastrami on rye and ask for 2 extra slices of bread. At the table each of us takes a half of sandwich, opens it up and distributes half of the pastrami on the extra slice. I pile cole slaw on the sandwich to make a great lunch. The tradition has stuck since I was a kid, even though I could easily eat a whole sandwich.

The 3-6 pm Tuesday through Saturday discounts their sandwiches to $6.00 a piece. Either way, Lable's Table is a great meal.