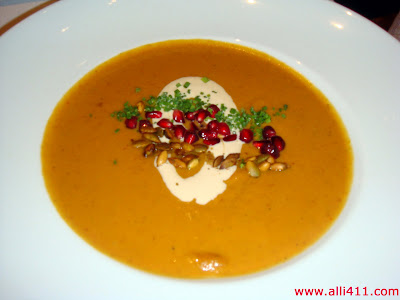 Leave it to Las Vegas to impress my taste buds. The Pumpkin Soup with Cinnamon Crema and Roasted Pumpkin Seeds tasted almost like a dessert. It was fruity, earthy and spicy. It's not just the pumpkin puree that makes it sweet, there's a little honey and maple syrup in it, and some cinnamon, ginger and allspice. Together the combo is irresistible. The soup is a staple on the menu at Bobby Flay's Mesa Grill. It was the star dish of lunch in Vegas followed by an scrumptious burger.

A couple days later I made the soup at home. It was every bit as good as in the restaurant and easy to make. Let me know what you think. Enjoy!

Variation: I doubled the recipe and used 7 cups chicken stock and 6 cups pumpkin puree. I omitted the chipotle puree and the crema. At the restaurant they served it with a few pomegranate seeds, a nice touch that is not in the recipe.

1. Bring 3 cups of the stock to a boil in a large saucepan over high heat. Whisk in the pumpkin puree, 1 teaspoon of the cinnamon, ginger, allspice, nutmeg, honey, maple syrup and chipotle puree. Reduce the heat to low and simmer for 15-20 minutes, stirring occasionally. Add more stock, if the soup is too thick.

2. Remove from the heat and whisk in 1/4 cup of the crema and season with salt and pepper to taste.

3. Mix together the remaining 1/2 cup crema and 1 teaspoon cinnamon until combined.

4. Ladle the soup into four bowls; drizzle with the cinnamon crema and sprinkle with roasted pumpkin seeds.

2. Toss the seeds with the oil and season with salt to taste. Spread the seeds evenly on a baking sheets and bake, tossing occasionally, for 15-20 minutes, until they are lightly golden brown and crisp. Let cool. Can be made 2 days in advance and stored in an airtight container.

This looks so delicious! :)
All the ingredients in it look great-- and good idea to make this with Pumpkin Seeds!

I've been looking around online for these so I can make Pumpkin Soup with Cinnamon Crema and Roasted Pumpkin Seeds also. :)

Tina: I love this recipe and make it often. Thanks for stopping by.
Alli

Alli411: I will *definitely* be trying this.
@Tina- I normally get my Pumpkin Seeds
from NutsOnline-- I've looked a fair bit and they seem to consistently have the best prices.
Lovely blog and post Alli411-- all looks really tasty!
~Sally