ALLI411 Back in Los Angeles From Spain 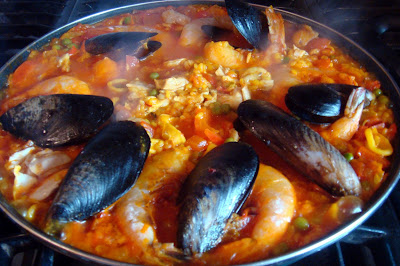 Greetings! I'm back from Spain. Had the honeymoon of my dreams. Such fun, adventure and romance **heart**, and great food. In the future I'll write some posts about our honeymoon in Spain. There's so much to write about (and so little time). I had planned to write more on the trip, but after all, it was our honeymoon. For now I just want to say hola Alli411 peeps. I've already been hitting some new great restos. As early as manana you'll get a taste.

The above photo is my first attempt at making paella. After our friend, Mercedes, made us some great paella, I kept on imagining making it myself at home. The day after we returned home, I made it. It certainly wasn't as good as Mercedes', it was a decent first time attempt though. I had the wrong type of rice, too short. Next time. Ahh, Espana.

Found this article useful? Mention Alli411 in your post, subscribe to our feed, link to us, or bookmark this site. Thanks for your support!
Posted by Alli & Win at 6/15/2009

Trip sounds amazing. Can you give us paella recipe? If I'm feeling courageous, I'll give it a try.

I just returned from Spain as well. We were in Barcelona. A great city. Look forward to hearing your Spain stories. And congratulations!

Welcome back! Glad you had such a wonderful time!

Anon: I'll post a paella recipe once I get it right. I had a little glitch in the rice. I used the wrong kind.