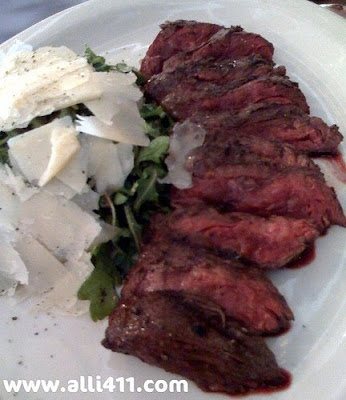 I took J+D to the cafe at Fred Segal on Melrose. I'd wanted to take these Massachusetts transplants to a very LA place. At first I considered Joan's on Third. I frequently see a lot of celebs there, which out-of-towners seem to like. A few days ago I saw Grey's Anatomy's McSteamy (Eric Dane) there. Yeah, he looks pretty much the same in person as on the show. The only problem with Joan's is that seating can be hard to come by. Reservations were a requirement for lunch with J+D.

The restaurant is technically named Mauro's, although everyone calls it Fred Segal's cafe. Fred Segal is a well known fashionista institution and tourist destination, very LA. It's also close to my casa, uber convenient.

They used to have an arugula salad with skirt steak on the menu. Baby arugula topped with shaved Parmesan cheese covers part of the plate. The other part is a skirt steak. It's a nice balance of greens and protein and tasty combo. Even though it's not on the menu, it's still available for the asking, which I did. You can too, just ask.

Where would you take E. Coast friends that recently moved here to lunch?