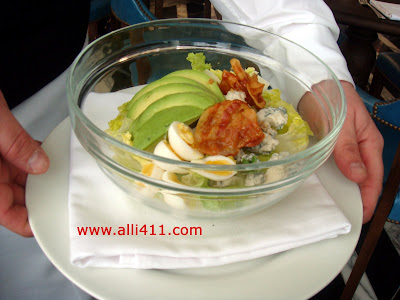 Day 3 at Cecconi's West Hollywood, former site of Morton's restaurant on the corner of Melrose and Robertson: I was impressed. There was an army of servers (it looked like 30 or so), some imported from New York, London, a French accent or two. The Los Angeles staff was being trained; servers shadowing servers. I was shocked that within 45 minutes of my arrival, there were more customers than staff. Cecconi's went from being almost empty to packed for lunch.

There was a ton of people: designers, foodies, people that wanted to be seen, and those who didn't. A fashionista with her less than fashionable husband walked in. He wanted the table in back, she, the one where she could show off the big rock on her finger and her 4 inch lavender and yellow heels. Where did the multitude come from? Maybe it had something to do with Cecconi's under the radar deal: during their first week through February 27th all food is 50% off. (Yes, that's right there's a couple days left to this deal.)

The place feels like a 5 star hotel lobby in -you guessed it- London, with just enough attitude that it feels special to be there. The style is British chic as opposed to Los Angeles shabby chic: Marble tables and floors, meant to last for years. Comfortable wood and blue leather (or is that pleather) chairs with brass grommets around the edges. An imposing bar. Chic, modern chandeliers. Waiters in black vests with crisp, white shirts, silver soup tureens and tea pots.

The food is decidedly Italian, just like the original in London, started by Enzo Cecconi, who was previously the General Manager of the famous Cipriani restaurant in Venice. The lunch menu is extensive. It reads Appetizers, Carpaccio & Tartare, Salads, Pizza & Panini, Pasta & Risotto, Charcoal Grill, Wood Oven and Sides.

The Prezzo Fisso for $15 is a great deal. You get a choice of soup or salad to start then a pasta or salad to follow. I started with a generous portion of Cecconi's Cobb: romaine, avocado, quail eggs, Gorgonzola and thinly sliced pancetta. The waiter explained to me that at Cecconi's they dress each salad (and also their carpaccio and tartare) at the table to accommodate for individual preference, a nice touch, yet I preferred the dressing on the side. All ingredients were fresh. The avocado was perfectly ripe, eggs cooked to perfection. I enjoyed my salad immensely. 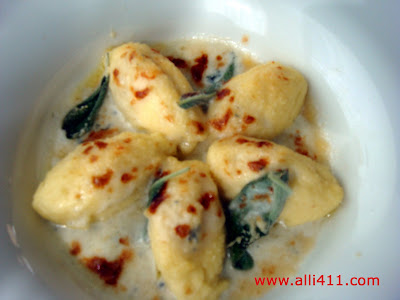 The Cobb would have been plenty for my appetite, yet I wanted to try some more of the food to write about it. So in your honor (yeah you) I followed with the Baked Gnocchi with butter and sage. Five extra large gnocchi came in the dish. Looks were deceiving. They were light inside yet rich. I was filled and satisfied after eating three.

Cecconis is open for breakfast lunch, dinner and late nights. There's free wifi, and a stack of fresh newspapers, New York Times and LA Times, free for customers. They encourage people to linger all day like the guy in front of me. I learned he'd been there all morning. It looked like he was editing a script on his laptop. Their goal, as Mark Somen (one of the visiting big wigs) told me, is to be a neighborhood hang out (and tres chic at that). I had no problem hanging out there for an hour and a half yesterday and I look forward to returning.

2. There's a wonderful room for a private party with seating up to 16. The room has a large art piece: a tasteful orange heart with butterflies (I know, it sounds cheesy, but it's not).

3. Major bonus points for -drumroll please- no music playing throughout the restaurant, none at all. I checked with the staff and this is on purpose. How refreshing!