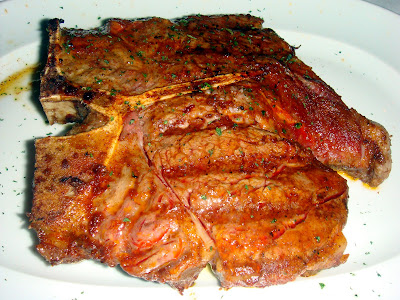 This would be a great place for Peter Klaven (Paul Rudd) to take Sydney Fife (Jason Segel) for a little bromance in the hysterical comedy I Love You Man. Maestro's ambiance screams rat pack/men's club and there were many a group of good 'ole boys back slapping and bonding. There were also tons of couples of all ages out on dates, and a huge pick up scene at the bar. Maestro's Steakhouse is a solid restaurant with wide appeal. Although it's the type of place that some (including my buddy Ryan) would probably just cringe at: everything is over-the-top including their carbon footprint.

Portions are gargantuan: made for dinosaurs. Take one of specialties of the house, a side of Lobster Mashed Potatoes ($32.95). I marvelled at it's size, a bowl that could have easily served a family of six, was brought to a table of two men. Win and I ordered a one pound Baked Potato ($9.95) instead. To get an idea of how big it was, the ones I bake at home are about 1/4 of the size. This one was around 8 inches long.

It's hard not to indulge at Maestro's, they've clearly thought of just about every little detail. Take the bread basket, inside were wonderful pretzel baguettes, the size of yams, with thick salt baked on top. They were simply out-of-this-world, perfect! The waitress said they imported them from Germany, highly unlikely but possible. 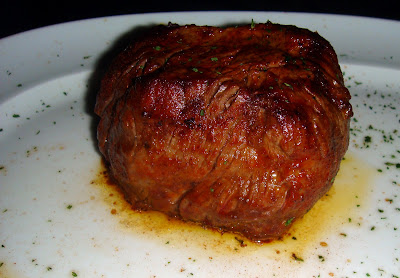 Maestro's serves corn-fed beef, wet-aged 28 days, seasoned with their proprietary blend of seasoning salt, similar to Lawry's. The 29 oz. Porterhouse ($49.95) was very good, as was the 12 oz. Fillet ($39.95). What surprised us was how the Fillet was cut. It was the size of a mound of dough, over 3 inches high. It looked quite odd and Win sent it back because it wasn't cooked in the middle (it was still cold). When it came back it was fine though.

I saved the best part for last. The service was impeccable, better than the food. Sitting down we had the choice of a black or white napkin. This is one of the few restaurants in Los Angeles that does this, and an indication of the care Maestro's takes to make sure that their customers have a wonderful experience. For those of you wondering what I'm talking about: white napkins often leave white lint all over my black pants. Having a black napkin prevents that problem.

They even sent over a complimentary piece of cake (probably to compensate for the steak not being cooked right at the first try). The most surprising detail: today, just as I'm about to write about last night's dinner, I get a call from Matt on behalf Maestro's thanking us for dining with them and asking about our experience. I ask him if he calls every new customer and he says yes. **clap, clap, clap** Bravo Maestro's!

1. Single women take note: there were clearly more men than woman at the lively bar scene, and a lot of flirting going on.

2. Ask to eat in the more intimate downstairs dining room. It's quieter and more elegant.

Found this article useful? Mention Alli411 in your post, subscribe to our feed, link to us, or bookmark this site. Thanks for your support!
Posted by Alli & Win at 4/14/2009

Maestro's was certainly good, but I would pick Wolfgang's up the street any day.

I agree. Wolfgang's is solid.