What to do with Blueberries: Homemade Blueberry Pie Lollipops 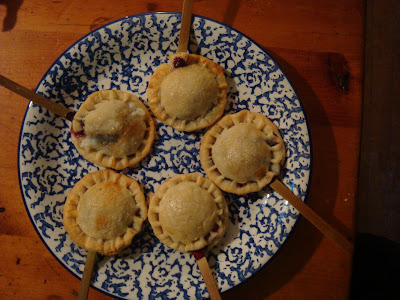 Forget making blueberry pie, dahling. Blueberry pie lollipops are the modern version of the ole' fashioned treat. Besides being cute as a button, blueberry pie lollipops are just the right size to satisfy a sweet craving without getting stuffed. Everyone seems to love these little desserts on a stick, including me.
Cousin Amy and adorable Jax helped me make them. They were pretty easy, especially with pre-made pie dough. Homemade dough would have tasted better though. We rolled the dough out then cut circles in it using water glasses. We experimented with two different sizes and found that a larger circle allowed for more filling. There's not a ton of filling though, about 5 large blueberries worth.
Popsicle sticks were hard to find. Instead we found bamboo skewers that Cousin Monty cut in half. They worked marvelously and did not burn (like other sticks could have). They also were reusable. 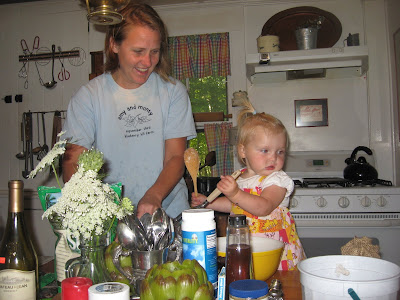 Is Jax not the cutest? I first saw these treats at bakerella who got the idea from ever so chic and modern luxirare. I used my recipe for the blueberry filling.
Blueberry Pie Pops Filling
2 Cups fresh blueberries
3/4 cup sugar
1/4 cup cornstarch
Juice of 1/2 a lemon
1/8 teaspoon salt
Combine all the above ingredients. Adjust sugar and cornstarch depending on tartness and juiciness of berries.
Blueberry Pie Pops
Roll out dough on a flat surface dusted with flour. Cut a bunch of circles in the dough. Place stick in the center of the dough. Add filling, approximately 5 large blueberries. Sprinkle a little extra sugar then cover with dough. Make little indentations around the perimeter using a stick to seal the dough. Paint with egg white then sprinkle with a little white sugar and follow dough baking directions. Bake until lightly browned. 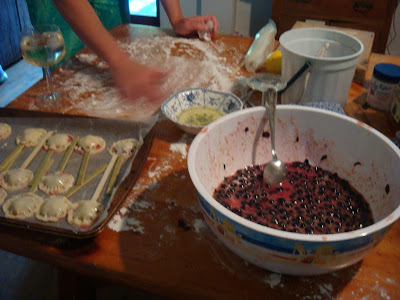 Blueberry pie pops are easy and super fun to make, especially while having a glass of wine.
Found this article useful? Mention Alli411 in your post, subscribe to our feed, link to us, or bookmark this site. Thanks for your support!